You are here: Home1 / Crowd101 Blog2 / Crowd Campaigns3 / What is the Best Time of Year for Crowdfunding? 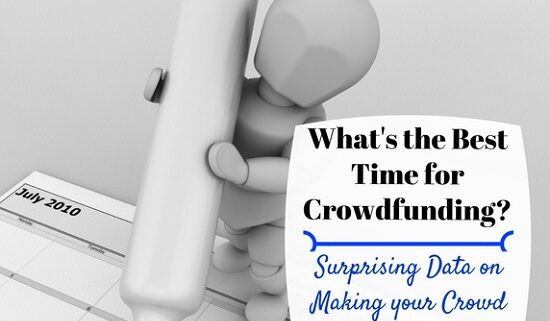 Launching your crowdfunding campaign will come down to other factors like your campaign pre-launch timeline and marketing but there is some data to support the idea that some points of the year are better than others to raise money.

Is there a best time of year for crowdfunding or fundraising?

The best way to answer the question is to look at Google search traffic for keywords around crowdfunding and fundraising throughout the year. Google provides data and charts showing when is the most active times of year for a given search term.

By seeing when people are searching for things like “crowdfunding” or “fundraising” we can get an idea of when might be the best time to start a crowd campaign.

The chart shows the relative traffic for the two words with crowdfunding in blue and fundraising shown in orange. The traffic is shown on a scale with 100 being the peak and all other periods relative to that amount. 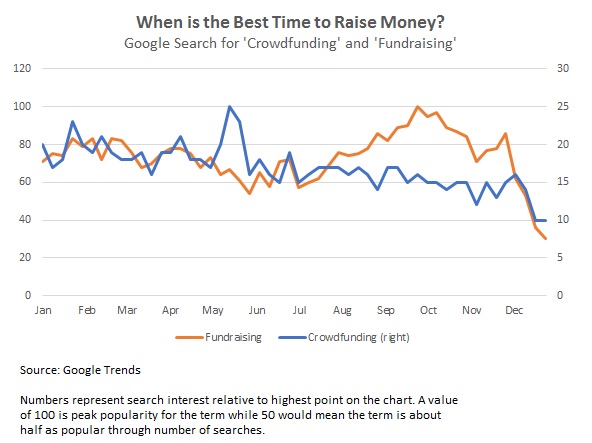 Following the orange line, we see fundraising has its end-of-year jump before the holidays from September through mid-December. There is a little bit of chicken-or-the-egg problem here because that is when most non-profits are plan their annual campaigns.

Because of that, it’s a little difficult to say if that time of year is when people are most disposed to charitable giving or if we’ve just been conditioned that way by annual fundraising campaigns.

The data around crowdfunding is surprisingly different from the best time of year for fundraising. The sweet spot for crowdfunding seems to be from February to late-May. In fact, the later in the year you get, the worse it is to start a crowdfunding campaign.

Tax refunds probably have a lot to do with the spring frenzy in crowdfunding. People are just getting to even on those post-holiday credit card balances and any extra money begs to be spent. Since most crowdfunding support is for things we buy for ourselves, it makes sense that campaigns wouldn’t do as well during the holidays when people are mostly buying gifts.

Is there a best time of month to start a crowdfunding campaign?

Besides finding the best time of the year for crowdfunding, there’s even more data to support the time of the month or week to best launch a campaign. 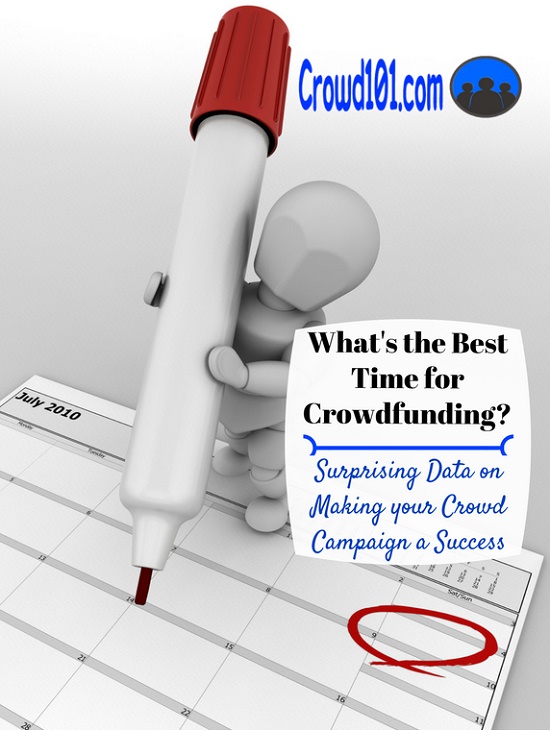 It should be no surprise that crowd campaigns launched around the 1st or the 15th of the month tend to raise more money. People are just getting paid and have money burning holes in their pockets.

I found some Kickstarter data from a 2014 review that showed Wednesdays and early afternoon were the most active times for supporter donations.

One last consideration, make sure you plan your campaign around any holidays for the launch and last few days. The first and last few days of a crowd campaign are the most active by far so you don’t want people out of work or away from their computer during that time.

Don’t take this as gospel and that it means you need to change your timeline to start crowdfunding only at a certain time of the year. Depending on your campaign, you might have better success crowdfunding around specific holidays or times.

For example, a crowdfunding campaign around some kind of athletic event might do better later in the summer or even later if you can tie it in with excitement around professional league play.

The best time of the year for crowdfunding will depend on when you can rally your community for the best promotion. That said, there is some evidence to support crowdfunding during the spring or later in the year for non-profit campaigns. Launch early or mid-week and make sure your schedule doesn’t conflict with any holidays.