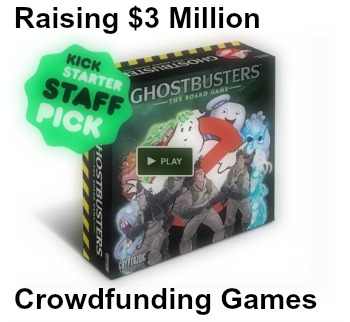 Today’s crowdfunding campaign review comes from Cryptozoic Entertainment, crowdfunders of the Hex: Shards of Fate game in 2013. After raising $2.3 million on their prior campaign, the game-makers are cracking the crowdfunding code again with a board game version of Ghostbusters and have raised more than $3 million with the two games crowdfunding.

What is your campaign about?

Our campaign is about putting out a comprehensive and inclusive Ghostbusters board game featuring lots of custom miniatures for fans of all ages, regardless of skill level. With Kickstarter, backers can customize and tailor their game above and beyond the base game to their personal tastes and budget which at this time is unique to Kickstarter.

I think Sara drops a hint to the group’s crowdfunding campaign success here. Gamers love customizable features in their games. It helps to really get into the game and feel a part of the story. The idea works in general crowdfunding as well.

We had done one before, HEX: Shards of Fate. We raised $2.3 million for the online MMOTCG from 17,765 backers, more than seven times our original goal.

While the average backer pledge of $129 is above the average in most crowdfunding campaigns, it is the sheer number of backers that is really driving success for Cryptozoic Entertainment. How did the team build such a huge following? Check out the website and you’ll see years of online presence through a blog, YouTube, conventions and magazine articles. The team’s YouTube channel alone, up since 2011, has more than 600,000 views.

We did a lot! First, we had to have a game to Kickstart! That in itself is a significant piece of the puzzle. We’ve spent the bulk of the time designing and developing the game. It had to play to satisfaction before any concrete date to launch could ever be considered. Logistically speaking we had created a schedule of stretch goals and social media boosts as well as creating FAQs and sending out press releases to key news outlets.

The answer hides a lot of the detail and history behind the team’s pre-launch activities. Most crowdfunding campaigns will not have a ready-made army of followers to tap. You’ll have to build your follower network mostly from scratch, building from your personal network and pre-launch crowdfunding hacks described in our earlier post.

You won’t need years to build a pre-launch crowd around your campaign but you should build up your network for at least three months. If you can raise enough support to reach about 20% of your goal in the first day, you might just attract the attention of Kickstarter staff and get featured.

The vocal backers. Good and bad. It’s great to hear the voices of the community!

The Ghostbusters crowdfunding campaign has more than 14,000 comments and 24 updates. The Hex crowdfunding campaign reached more than 20,000 comments and 119 updates. Not only does the number of comments show how active and engaged backers are but gives the crowdfunding team an opportunity to improve their campaign and the product. You need to read and reply to every single comment left on your campaign. The commenter will feel like their contribution was valued and will feel like a part of the team, maybe even becoming a cheerleader to their friends.

I wouldn’t necessarily call it a mistake, but we were granted international distribution right a few days into the campaign, which has challenged us with our shipping and distribution plans and we are now on a very short timetable to make a very important decision.

Communicating with our backers. We chose not to post a print ready rulebook as to not declare that “here is everything, take it or leave it” for a reason. The biggest reason is that it has left us in a position to be flexible, knowing that we were going to be and are now interacting with thousands of game players and Ghostbusters fans. Another unique aspect of Kickstarter is that we get to develop not only for the end user but WITH the end user.

This is one of the biggest benefits to crowdfunding and I’ve talked with campaigns that built their whole development process around crowdfunding. Because crowdfunding evolved in an environment of helping each other out, backers are extremely vocal and helpful with comments. They will tell you everything you want to know about your product, all you have to do is ask.

We interact with them on an individual level. We try to avoid the cold feeling a lot of companies can have when addressing backers in mass updates or FAQs. We take the time to make sure the backers know they are being heard, and we try to respond to specific individuals when we can.

How are you building community with supporters?

Getting to know them. Getting to know what brought them to our campaign, why are they backing us? They in turn have been forging relationships with each other and it’s been a blast to watch that unfold in real time.

It’s that kind of community that is driving tens of thousands of backers to the two campaigns and helping the team to beat its funding goals.

Be prepared to be available and answer questions you didn’t think you’d have to answer. Backers do their homework and want to know that their money is being put to good use. Don’t let them down by not being prepared to answer them.

The Cryptozoic team is doing a great job of building a community around its games and driving huge success for its crowdfunding campaigns. One thing that didn’t come out in the interview is the team’s use of stretch goals. While you will set a funding goal for your campaign to reach, you also have the option of detailing what you want to do if your campaign raises even more money.

Fail to detail stretch goals on your campaign and people may lose their motivation to support the project after it has reached the original goal. The Ghostbusters crowdfunding campaign features 13 stretch goals that include some really cool extra figurines. This is helping to keep momentum going and has resulted in the campaign beating its goal by more than three times already.

I want to thank Sara and the team at Cryptozoic Entertainment for sharing their experience with crowdfunding. It’s a great example of how a small business can use its network of customers and followers to really drive crowdfunding success. 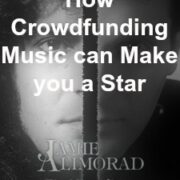 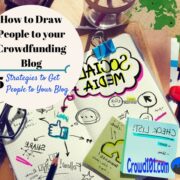 How to Draw People to Your Crowdfunding Blogby Joseph Hogue 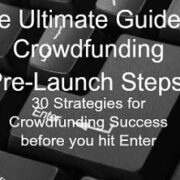 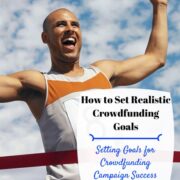