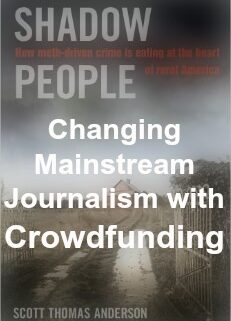 Today’s campaign review comes from Scott Anderson and his Kickstarter campaign, The Cutting Four-piece: The nexus of crime & prison culture. Scott is using what he learned from a previous campaign for his book “Shadow People” to launch this hard-hitting book about the link between prison culture, overcrowding and ongoing crime on the streets. He spent three years working with both police officers, detectives as well as convicts and drug addicts to provide an in-depth, gritty look into the issue.

Scott’s story is really about how crowdfunding is helping to change the face of mainstream media and publishing. Not only is it helping to open up opportunities for journalists and writers that haven’t been able to get funding otherwise, it is also helping those journalists and writers tell the TRUE story. No longer will they have to edit out the graphic facts in their stories to get it past publishers afraid to print the truth. Crowdfunding is breaking down that traditional form of censorship and getting the real story out.

Tell us about yourself and the campaign.

As a newspaper crime reporter, my campaign is really about creating a piece of journalism that connects many of the dots around American crime that individual reporters really aren’t in a position to do any more. It is looking at what often doesn’t get reported – the clear connections between the force of addiction, the entrenchment of criminal thinking, the lack of mental health services and a lot of questionable justice policy that claims to address these challenges, but is often more geared to the will of special interest groups. There’s a saying from one of the people interviewed in the project – “The truth is in the streets.” This campaign is about taking people into the darkest corners of that reality.

Since I had received traditional journalism grants for special projects in the past, I naturally attempted to get a grant for this project as well. It got within the final rounds of judging with a national foundation two years in a row, but never made it over the finish line.

I’m hearing a lot of this lately that grants are getting really tough to get and a lot of great works are not getting published. It’s not only in publishing but we’re seeing crowdfunding really step up in filmmaking and other areas as well.

It’s been said that Kickstarter is primarily about community. In my experience there is a lot of truth in that notion. I’m a full-time newspaper crime reporter. In 2011, I launched a successful Kickstarter campaign for “Shadow People,” a nonfiction book on how methamphetamine addiction drives crime in rural communities. I already had a national journalism grant for the project, which allowed me to spend 18 months embedded with law enforcement while traveling to different small towns across the U.S.

The idea behind the Kickstarter for “Shadow People” was to get funding that would allow me to work with a nonprofit book publisher and a nonprofit book distributor — therefore leaving the original publishing house I had signed with. The first publisher for “Shadow People” was demanding changes to factual reporting and vital content because it was worried about lawsuits. I didn’t want to water down the journalism like that, so I turned to Kickstarter. Even though I wasn’t a famous journalist — no one outside of four counties in California had heard of me at the time — Kickstarter backers from around the nation supported the project. Some even messaged me and said that they wanted to help bring awareness to how meth was causing people in their own towns to disintegrate, while at the same time triggering numbing amounts of crime.

Scott relates an important idea here for crowdfunders that you do not have to be a nationally-recognized name or have huge connections. You just need a good idea and the will to work hard for it. Put up a compelling message and reach out to the online community and people will crowdfund it. 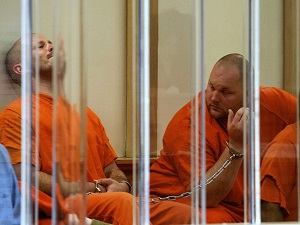 The main thing I did was organize a list of people who had messaged me over the last few years in regards to “Shadow People” and made sure to alert all of them about this campaign. I also reviewed the Kickstarter backer reporters on “Shadow People” and dropped a line to those individuals as well.

This is why I often recommend to a lot of campaigns that they launch a “starter” campaign first. Too many people think they need to crowdfund years of their budget or raise tens of thousands for full production of their product. Start small and crowdfund the idea and a working budget that will get you to an important milestone. This first campaign is going to teach you a ton of great information and will provide a community of backers for any follow-on campaigns.

How many hours a week do you spend on your campaign?

It seems like about two to three hours a day, seven days a week.

About 15 to 20 hours a week seems the average for most campaigns though it can range all the way up to a full-time job and more. A lot of it depends on how much time you’ve spent building that community and reaching out to your most enthusiastic supporters to help out with their time.

One of the most important tasks you can do for the campaign is, during pre-launch, find your strongest supporters and talk to them about helping you with the campaign. I outlined different ways to do this in a prior post, Turning Blog Visitors into Crowdfunding Campaign Success. An email service like MailChimp will show you the open and click-through rates on your emails or newsletters as well as which subscribers were most active. This is a great way to find your active supporters and the ones that might be ready for a bigger role in the campaign.

So far, just $65. I may be throwing a big Kickstarter party in the Sacramento region, so I’m sure there would be some costs associated with that (even if I pour away my entire wine collection).

We outlined some of the best ways to do crowdfunding campaign marketing on a budget in a prior post. While you can run a campaign on nothing, that doesn’t mean you necessarily should. I’m not a big fan of a lot of the press release or marketing solutions provided to crowdfunders but there are some ways to get the best bang for your buck.

Scott hits on one of the best ways to promote your campaign with an offline party, though it should be done before the campaign is launched. While crowdfunding is an online phenomenon, your best and most active supporters are still going to be the ones you make with an offline and personal connection. Running a pre-launch blog or outreach campaign for a couple of months then take all that momentum to throw a campaign launch party. This gives your backers a chance to get to know each other and share why they support the campaign. It will build that community of backers you will need to keep the momentum going in your campaign and give you a chance to raise a little money even before the campaign goes live.

My biggest mistake has probably been not explaining Kickstarter well enough to people who aren’t really familiar with the concept of crowdfunding. It seems like Kickstarter has been popular for at least five years, but it’s surprising that I still meet folks who really don’t know what it is, and how it works.

These include a lot of people who are interested in buying “The Cutting Four-piece” when it comes out as a book; but are still sometimes reluctant to get an advance copy as a reward by pledging into the Kickstarter fund.

I think I’ve done a good job of touching bases with a lot of people who truly worry about the state of journalism today, and therefore are open to actually doing something about it by frequently checking the journalism and publishing categories of Kickstarter to see if there are meaningful or interesting reports they can help with.

Reaching out to online forums or other groups within your campaign topic is one of the must-do activities in pre-launch. No matter what your cause or product, there is already an active community that shares your passion and sense of purpose. A lot of campaigns I talk to think they need to convince people of the need to support their cause or idea. Find the people that already share that passion for the idea and just present your campaign as a way of doing it.

By becoming active in these communities months before your campaign launch you will be able to drive people to your crowdfunding blog and build a strong list of supporters.

In my view, connecting with people on an emotional level is why the video portion of a Kickstarter page is so crucial. In the case of this new campaign, I mixed video interviews with a former armed robber and a former meth cook with still photography that was taken while I was following law enforcement. We edited that content over original music from a band that lives in the area where some of the crime photographs were taken. What you hope is that the whole video package connects with people visually, sonically and psychologically.

Once “The Cutting Four-piece” is released, and all of the backers have their rewards and stores and online retailers have copies to sell, the Kickstarter fund is also going to allow me to get several hundred free copies to community foundations and nonprofit groups that work around drug abuse prevention with youth or criminal rehab with adults. After that, there will be about two straight years of doing public book talks and public awareness seminars. The biggest thing that works of journalism and all types of mainstream books have in common is that they don’t automatically sell themselves. You have to work hard to get the word out about them, even if they involve a topic that effects a lot of peoples’ lives. 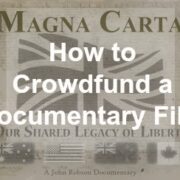